Wow!  What an emotional episode of WWE Monday Night Raw that was for us wrestling fans.  I had full intentions on writing tonight after seeing the beginning of Raw, and hearing what Roman Reigns had to say.  I know a lot of people aren't fans of Roman, but I think in this situation everyone - from fan to pro wrestler - can unite on this in wishing Roman Reigns the best of luck and support in beating this horrlbe disease once again.

Is there a better night to have an emotional situation topped by another emotional situation?  Probably not.  Which is why the WWE pulled the trigger tonight in an era where wrestling fans will say, "the WWE doesn't do anything edgy anymore."

Let me just state though right off the bat, that in 2014 when Seth Rollins turned on Dean and Roman, I put that down as one of the greatest heel turns in recent history.  That was topped by Roderick Strong earlier this year joining the Undisuted Era in NXT.  But tonight, you couldn't have wrote a better story.

Jerry Lawler once said, that what makes an angle or a feud real is having reality involved in it.  It worked in 2005 with Edge and Matt Hardy in the whole Lita situation.  So maybe The King was right on that.  So let's fast forward to tonight.

Roman Reigns gives an emotional speech and is met by his Shield brothers with hugs and tears.  What a moment!  Then we see Dean Ambrose and Seth Rollins have a chance to be Tag Champions once again tonight in their match with Dolph Ziggler and Drew McIntyre.  Now if this was any other night, I would have guessed a DQ finish, but I had a feeling tonight we were going to see new Raw Tag Team Champions.

I was extremely happy, because I am a huge Seth Rollins fan.  Ironically I became a huge fan of his the night he hit Roman Reigns with the chair, breaking up The Shield.  So I have been cheering him on ever since.  So to see Seth with not just the Intercontinental Title, but one half of the Raw Tag Titles, seemed pretty freaking sweet to me!

The shocked look on the faces of the fans in the crowd really proved that tonight was the perfect night to do the heel turn.  Dean Ambrose is now hated, and probably will be hated for a very long time.

Now for me to really enjoy this, I put away the whole concept that wrestling was staged, and that they knew what was going to happen.  I wanted to be that 7 year old kid again, who remembers watching Barry Windham turn on Lex Luger - thus giving up their NWA World Tag Titles to Arn Anderson and Tully Blanchard.  So I did just that, and I came up with this...

There, it's fun to get lost in the excitement that is sports entertainment.  Because let's be honest, wasn't watching wrestling a lot more fun when you weren't 100% sure what was going to happen?

Also, what's going to happen with the Tag Titles on Raw?  A tournament perhaps?  Will Baron Corbin make Seth and Dean remain champions - who will now hate each other - much like Tommy Dreamer and Raven had in ECW years ago?  Should make for some interesting TV if that does happen.

So in ending this blog, I will say this...  Roman Reigns, you got this.  You can beat this, and come back.  Whatever you have to go through, just know you have everyone pulling for you.  And honestly, I bet a lot of people want to see you come back to help Seth get revenge on Dean Ambrose. 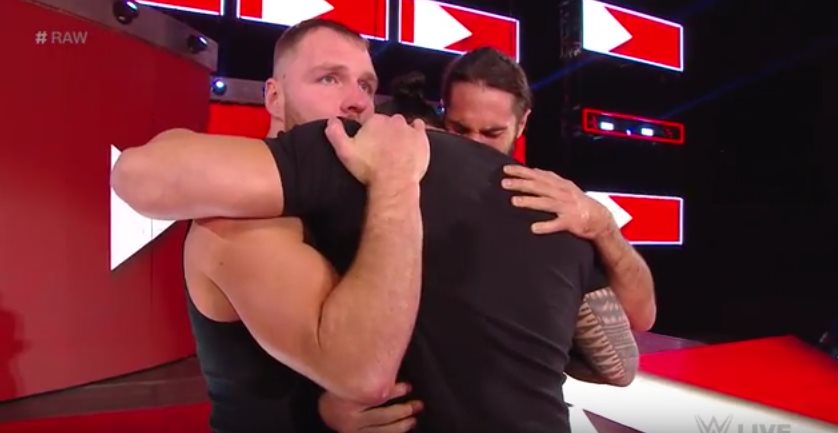