The Undisputed Era Is Looking Strong!

Those are some interesting four names, right?  I mean, what would Hulk Hogan have anything in common with when it came to someone like Roderick Strong?  That answer is simple...

Oh wait, now I sound like I am quoting Hillbilly Jim's WWE Hall of Fame speech.  But ironically that word suits all four men.  All four men sacrificed something to better themselves in their career and they had one opportunity to do it, and all four men struck when needed.

Barry was riding high, one half of the NWA World Tag Team Champions with Lex Luger and in a match with Arn Anderson and Tully Blanchard for those very same Tag Team Titles, sacrificed his gold to be able to raise four fingers in the air, and be a member of the elite group in pro wrestling  - The Four Horsemen.

When Kevn Nash and Scott Hall jumped ship from the WWE to WCW, they talked about a third man.  Who else knows about the WWE more than Hulk Hogan?  So Hulk didn't just leg drop Randy Savage.  No, Hulk didn't just leg drop WCW.  For Hulk Hogan leg dropped each and every wrestling fan that night at Bash At The Beach in 1996.  Hulk did it to better his career and become a main player once again in the most powerful gang in pro wrestling - The New World Order.

Seth Rollins went from being ROH Champion, to NXT Champion, to WWE Tag Champion.  He had his brothers by his side, in Dean Ambrose and Roman Reigns.  He was with them to the very end, always watching their backs, and them watching his.  The feud with Evolution they had dominated, and really there was nothing left to prove.  But there's always a plan B, right?  Seth proved that by not just slamming a chair in the back of Roman Reigns, and in the stomach of Dean Ambrose, but he did that to every fan that loved The Shield.  For Seth Rollins saw a chance to shine on his own, and with that he became the Money In The Bank winner, and cashed in at Wrestlemania 31 to become the WWE World Champion in the main event no less.  Seth gave up his brotherhood with two men to stand side by side with the man and woman who ran the WWE - Triple H and Stephanie McMahon.

Roddy vs. The World, right?  We've heard it for years.  Former ROH Tag Champion with Austin Aries, a former ROH World Champion, and a former ROH TV Champion, for Roddy is no stranger to gold.  He is no stranger to the Undisputed Era either.  He has had battles with Bobby Fish in the past for the ROH TV Title, and left ROH around the same time Fish did.  Months later Adam Cole (bay bay!) and Kyle O'Reilly would come in as well.  But Cole, O'Reilly and Fish stuck as a unit.  They were a group.  They wanted Roderick Strong with them, but Roddy kept turning them down.  It go so severe between Roddy and the Undisputed Era, that they had to settle it in a two ring match called "War Games" back in November of 2017.  But Roderick Strong was on his way.  He found a partner in Pete Dunne, and the NXT Tag Titles seemed like a sure thing.  For Dunne hit his finisher on O'Reilly, he went for the pin, and then.....

Roderick Strong kicked Dunne in the back of the head and gave him his finisher so O'Reilly could get the win to retain the NXT Tag Titles.  Strong then took the Undisputed Era arm band off Adam Cole (bay bay!) and put it on his arm, thus showing he was united with Cole, O'Reilly and Fish.

For the strongest group in the history of NXT is even stronger now.  Roderick Strong may be called the "Messiah of the backbreaker" but Strong may be the backbone now to keep this group together.  For The Undisputed Era have the new NXT North American Title, and the NXT Tag Titles.  I have a feeling the next step is the WWE United Kingdom Championship once Strong and Dunne meet one on one, and then any of the four men could easily go after the NXT Title down the road.

I know this is the time frame when wrestlers - both men and women - get called up to the main roster come Monday and Tuesday.  But I have a strong feeling (pun intended) that the Undisputed Era will be in NXT for a little while longer, dominating that devision for years to come. 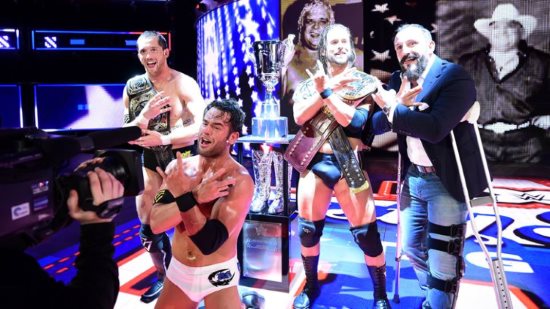 This picture tonight at NXT Takeover is the beginning of an era... of an Undisputed Era!