I can honestly say I don't get shocked much anymore when it comes to professional wrestling.  I have been watching it since the age of five, and I am 36 years old now, so I have pretty much seen it all in that time frame.  So when something shocks me in the world of sports entertainment, it has to be a big deal.  And let's face it, nothing on Raw or Smackdown is going to shock any of us anymore as wrestling fans.

I wasn't really expecting much in regards of tonight's NXT Takeover show on the WWE Network.  I read who was wrestling, and aside from a few matches, I felt it was a pretty basic show.  Maybe other people felt it was going to be a great show, but compared to last year or the year before, this Takeover show seemed dry.  Though I was really looking forward to the NXT Tag Title match - mainly because of Eric Young.  Even though he wasn't wrestling in the match, I was still going to root for SAnitY to win.

Eric Young WAS in the match.  Excellent, now I am digging this tag match even more.  It had a lot of intense moments in it actually, and the crowd was jacked for it.  The same thing happened at the last Takeover show too, when DIY fought The AOP in the ladder match for the tag titles.  So NXT is at least doing something right in regards of the tag division and has for quite some time.

For Eric Young is now one half of the NXT Tag Team Champions!!

Congratulations "Jer" on the win.  Everyone is extremely proud of you, and I know your mom had a front row seat from Heaven watching you win your first WWE championship in the NXT brand.

Now back to the big shocking moment.

The first one was when Kyle O'Reilly and Bobby Fish jumped the barricade and laid a beat down on not just The AOP but also on SAnitY as well.  For reDRagon was here, and they were making an impact!

So I was pretty excited about that.  But little did I know my excitement would double within an hour.  For it was now time for the main event, Bobby Roode defending his NXT Championship against Drew McIntyre.  The match went back and forth and then finally Drew got the kick in on Bobby and the pin and we had a new NXT Champion!

Then I noticed the fans going nuts behind Drew in the crowd, pointing and cheering.  The camera panned over and reDRagon were on the corner, distracting Drew.  Why was that?

Wow!!  Adam Cole is really in the WWE, and he is in the ring, with Bobby Fish and Kyle O'Reilly.

Wait a minute, did I say that correctly?  Adam Cole is in the ring, working with his former partner - turned vicious enemy - Kyle O'Reilly?  Apparently so!

Wait a minute once again.... aren't all three men former champions in Ring Of Honor?  Whether it be TV, Tag or Heavyweight?  Again, apparently so!

This is amazing!  For NXT Takeover turned into ROH Takeover.  I mean, if you look back at the track record for the WWE, they never handled invasion angles well.  They botched the Alliance situation in regards of WCW and ECW in 2001.  The NWO fell flat within months in 2002.  The 2010 NXT invasion even blew, and that was a WWE creative brand!  But somehow, we have a ROH invasion happening right now in NXT.  Will Roderick Strong join them?  Where does Nigel McGuinness stand?  This is very exciting, and I hope the WWE doesn't drop the ball with this one like so many in the past.  Then again, if Triple H is in control of this, I have a feeling it will go off perfectly.

So let's hear it for the WWE doing something awesome.  We have a faction that is all ROH based wrestlers, who the fans realize are from ROH, and are excited now to see what is next for reDRagon and Adam Cole (bay-bay).  Ring Of Honor's lost is clearly NXT's gain on this one. 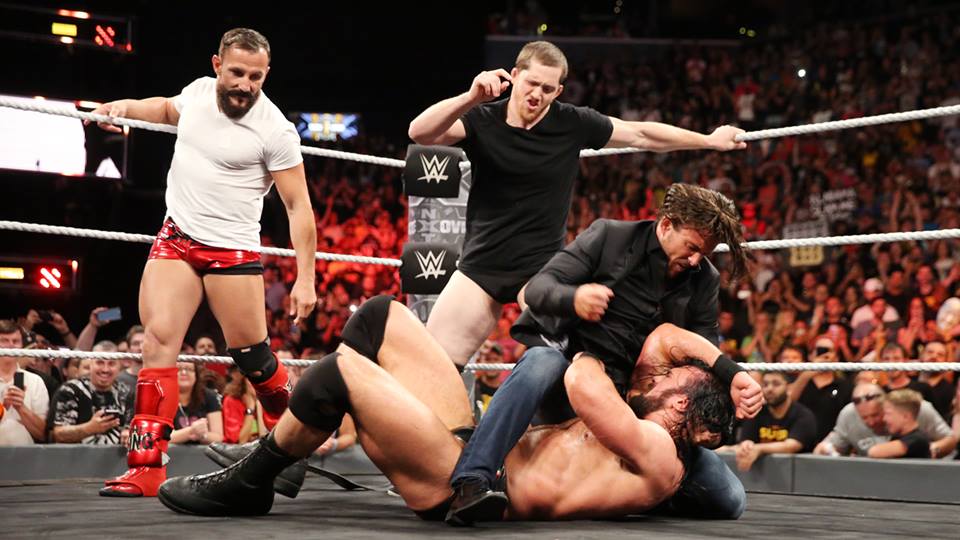 What a moment that was.  Something I don't think any wrestling fan would think they would see ever, but our dreams came true.  For reDRagon and Adam Cole (bay-bay) are here in NXT, and I am sure they aren't going to stop until all three men have some gold.