"He Spent 15 Years Getting Overlooked"

"15 years getting under booked, now what's ROH gonna do, when all their talent leaves?"

Okay, so I ripped off the song "Bob" by NOFX there, but changing those lyrics around to what I created, you now get the song "Daniels."  For it finally happened, after 15 long years in ROH/TNA, Christopher Daniels can now say he is a World Champion!

I met Christopher Daniels in 2005 at a BCW show in Windsor, Ontario.  That was the same show where Jeff Jarrett beat Raven to once again become NWA World Champion.  But I went to the show to see my old friend, Eric Young - who at the time, I hadn't seen in well over three years.  So EY was standing around with his mom, friends and me, and I saw Daniels.

So I went up to him and said, "Hey Chris, can I get a picture?" and he was happy to oblige.  And here is said picture.

He then looked at Eric Young's mom and said, "Mama Showtime, your son beat me with a small package for the Tag Titles."  Just super funny, and I became even a bigger fan of his than I already was.

But it seemed TNA wasn't a fan of his.  Sure, Daniels had many Tag Title wins, with the likes of Elix Skipper, Low Ki, James Storm, AJ Styles and Kazarian, and multiple reigns of being X-Division Champion.  But they never seemed to want to put him as the World Champion.  He had matches with AJ Styles for the Title in 2009, but never won it.  He would get fired, and rehired and fired and rehired from TNA that I lost count after a while.  Until in 2013 when they let him go for good.  So it was off to ROH once again.

The 'Fallen Angel's' ROH career is just as messy as his TNA career at times.  Tag Title reigns, TV Title reigns, and eight or nine World Title shots, but never a win.  It seemed like in 2005 that he was destined to win the belt which was created for him - as so many have said in the past - in his feud with CM Punk.  But for some reason, ROH chose to have Punk drop the ROH Title to James Gibson instead of Daniels, or even Samoa Joe for that matter.

So Daniels came to terms with that he was probably never going to win the big one.  But the fans never came to terms with that.  The hardcore Christopher Daniels fans wanted him to have it at least one time in his career.  The ones that followed him from the early days of Windy City Wrestling in Chicago, to ECW, to WCW, to TNA, to ROH, and every where in between.  The Super 8 ECWA tournament that he won - not once, but twice!  The feuds he has had with the likes of AJ Styles, America's Most Wanted, CM Punk and Samoa Joe, plus others.  The guy needed that one last chance, to see if he could be that World Champion.

The talk in ROH lately was the Broken Hardys being there and winning the ROH Tag Titles, but after this past Friday, the talk is now that we have a new ROH World Champion, and his name is Christopher Daniels!

He beat Adam Cole (bay bay!), with the help of long time friend, Frankie Kazarian, but it happened.  And everyone was so damn happy about it, and rightfully so.  To see Jay and Mark Briscoe, Chris Sabin, Kazarian, among others in the ring to celebrate with Daniels was awesome.  To see him get presented the original ROH Title that was created in 2002 - that really was created for him - was amazing to witness, as he held both the current and classic ROH Title over his head.

I am not sure if Daniels got the title because Adam Cole (bay bay!) is leaving for the yellow and black colours of NXT.  Or maybe it was just the right time to put the belt on Daniels.  I am not sure, but I am happy that it happened.  People are talking about how fans piss and moan over Goldberg winning the WWE Universal Title, but those same fans are cheering on Daniels winning the ROH Title.  Well you see, there is a huge difference there.  Daniels has never held it, and went for many years trying to grab that belt.  Where as Goldberg is already a former two time World Champion, and came back for the money and the fame.  So please don't compare the two wins.

So with that, I leave this picture, of Christopher Daniels celebrating his big World Title win! 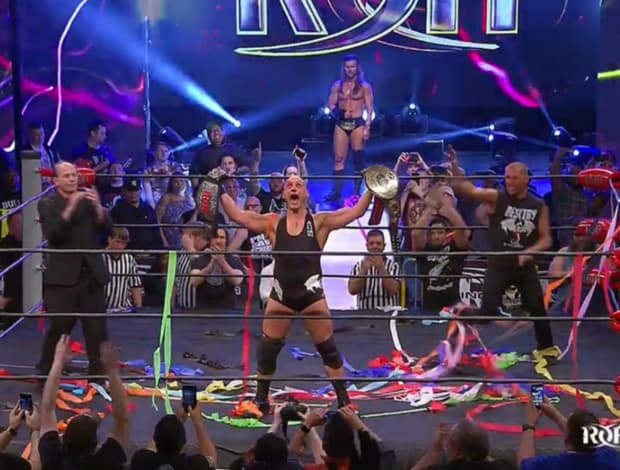 Congratulations, Christopher Daniels!  The chant "you deserve it" is best suited for you in this picture right here.