TNA's Deletion of the Broken Hardys is ROH's Gain!

The world of pro wrestling has always had its ups and downs and none were greater than the Monday Night War era.  Where a wrestler could be wrestling on WWE Raw one week and show up on WCW Nitro the next.  Or where he could be on WCW Nitro one week and appear at an ECW event the following Saturday.  But that all changed once Vince McMahon "bought and owned his competition" as he so likes to put it.  But with the demise of WCW and ECW in 2001, saw the birth of TNA and ROH in 2002.

TNA - the little engine that could (constantly mess up for the past seven years).  Okay, so TNA is a lot like that little engine that could though in that book.  Somehow, TNA always keeps surviving.  And in the past few years TNA seemed to really be at their breaking point.  They lost life long TNA guys like Bobby Roode and Eric Young.  Austin Aries and Samoa Joe opted to leave, have a cup of coffee at their old home of ROH, and then go off to that little brand called NXT that people seem to care about.  And don't get me started on when TNA chose to let guys like Alex Shelley, Chris Sabin, AJ Styles, Daniels and Kazarian go!  TNA started to look like a really sad state compared to what it once was.  Even Kurt Angle chose to walk away last January from TNA.

Matt and Jeff have been a part of TNA for a while, but were there usuala Matt and Jeff like characters.  For Matt it screamed 2005, and for Jeff, well... it was just always Jeff.  But a heel turn by Matt after winning his second TNA World Title and a quick loss to Drew Galloway helped 'break' Matt into something special.

It started out as a complete joke.  I don't think anyone took it serious at all.  Until - either by accident or on purpose - Matt said those six little words...  "Brother Nero, I knew you'd come."

Sure, "Broken Matt" stole it from an anime film that nobody has probably ever heard of, but it doesn't matter, it got over like crazy in the wrestling world.  Fans everywhere would chant it.  And believe you me, it really did take off everywhere.  Even on WWE television you would hear a mild chant at times of "Delete!  Delete!  Delete!"  So with that, "Broken" Matt and Brother Nero were fan favourites, and once again became TNA World Tag Team Champions.  And the wrestling world was once again talking about The Hardys.

The TNA fans were loving The Broken Hardys and all the crazy skits that came with it.  The matches and fights from "Broken" Matt's home were amazing.  The clever lines such as, "even the man with three H's in his name would love how we buried these young superstars", among other great moments including Vanguard 1, Senior Benjamin, and even King Maxel's in ring debut with a win over Rockstar Spud.  It really caught on, and fans just couldn't get enough of it.

Jeff Jarrett apparently somehow got his hands back on TNA, and yes, I know he created it, but the TNA Jeff Jarrett created and helped ran is long dead, and so far from what TNA has become each week on the Fight Network or POP TV.  And that caused the reigning TNA World Tag Team Champions, the Broken Hardys to up and leave TNA Impact for good.  The best thing about TNA each week is now gone.  And not just "Broken" Matt and Brother Nero, but Maria Kanellis is gone, Mike Bennett, Drew Galloway, among others.  Everyone that was helping make TNA better over the past year or so, is pretty much gone now.

It shocked the world at Final Battle of last year, when "Broken" Matt appeared on the video screen to challenge the Bucks of Youth to a match.  This was a place where Matt Hardy appeared at for years along with a group called The Kingdom, and was booed heavily and was not really welcomed.  But this was a different Matt Hardy, for this was "Broken" Matt, and he was surely more than welcome to be in a ROH ring.

Enter The Broken Hardys in ROH.

Just three days ago, they were TNA wrestlers, and TNA World Tag Team Champions, and as of March 4th 2017, "Broken" Matt and Brother Nero are now ROH wrestlers, and the new ROH World Tag Team Champions.  And they had such a reaction from the crowd.  They loved it!  For The Broken Hardys have found a new home, a home that they will be respected and treated properly.  For TNA can have that old 2006 image all they want again, with the likes of Jeff Jarrett and Dutch Mantell running that company, but Ring Of Honor will have nothing but a 'broken' good time. 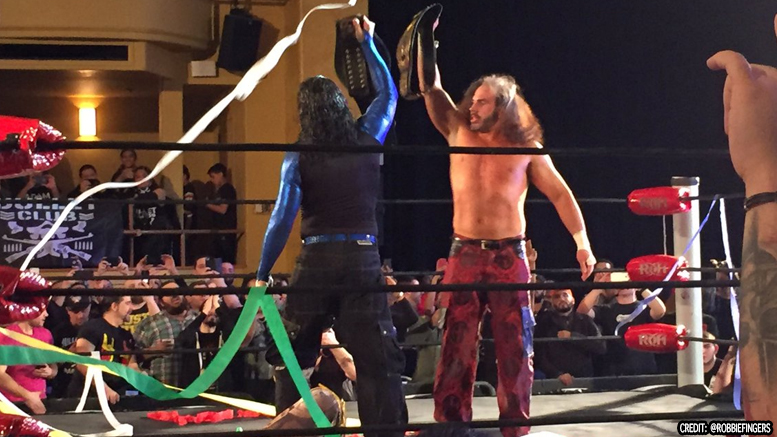 So now with "Broken" Matt and Brother Nero as the ROH World Tag Team Champions (of the world?  Sorry Daniels) it's safe to say that the Ring Of Honor tag teams better be on the lookout now, for The Broken Hardys will make them all....  "Delete!  Delete!  Delete!  Delete!"