I am very excited and pleased about what I read tonight regarding the NXT show that took place.  For an old friend of mine showed up and went right after the new NXT Champion Samoa Joe.  Oh wait, that's right.  I shouldn't gloss over that.  For last week, Samoa Joe beat Finn Balor to win the NXT Title at a live event.  I guess anything can really happen at these WWE and NXT live event shows.

Back to the story at hand.

As I was saying, an old friend showed up tonight, and his name is Eric Young.  But I call him Jeremy.  As you may or may not recall, I wrote a blog about this man a little over two years ago.  Just in case you missed it, here it is.

I was so excited when Jer won the TNA World Title.  I suppose in the wrestling world, the letters TNA don't seem like much to fuss about anymore.  But at one time, that company was on the verge of breaking out and being something special.  Then it just fell drastically at the hands of its own success.  But still, Jer could at least say he was a World Champion in a wrestling organization.

All his friends and family celebrated online about this.  It was a huge deal for us in Canada who grew up or trained with Jer, or who had a personal friendship with him from over the years.  We all were so excited and the Facebook comments and messages came in.  Congratulating him on a job well done.

I am so proud of everything that Jeremy has accomplished.  I remember going to the ICW wrestling school with two friends named Mike and Glenn in the summer of 1999, and I took a bump on the ring with Jer, and two other friends named Aaron and Adam standing by.  I took the bump and I remember thinking, "OUCH!"  I officially decided right then and there that my dreams of being a wrestler were now gone, but I could still write about wrestling, and that I have done over the past five or six years.

Tonight though is a different feeling.  Because as cool as it was to see him in BCW, and TNA, and even House of Hardcore, to see Jer wrestle in an NXT ring is huge.  Jer has had a lot of haters over the years on the internet.  He may know that himself.  People thought it was a joke when he won the TNA Title, because he went from being a comedy act to being the World Champion.  But these 'smart mark' fans don't know anything about the wrestling business and what makes or breaks a guy.  Hell, I don't even know it.  I just love writing about it!

The name Eric Young was huge in Ontario back in the early 2000s.  He was the 'daredevil' of Team Canada.  He did it all in TNA, and he clearly out grew TNA, and now he is in a new territory with old friends like Samoa Joe and Austin Aries, and new faces like Finn Balor and Shinsuke Nakamura.  It's going to be really exciting to see what the future holds now for Eric Young.  All his friends and family are ready to take the ride with him. 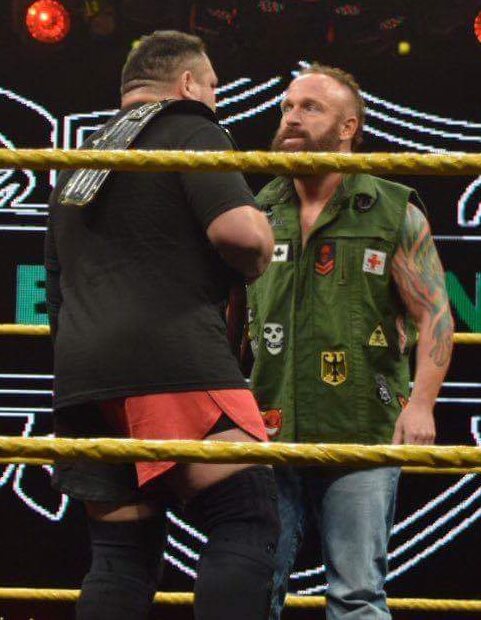 - Jammer aka your buddy Bill