Jim Ross Fired: Business Is About To Pick Up

Wow, I can't believe it.  Two posts back to back and both contain information on WWE commentator Jim Ross.  I mean, JR.  Or should I say, Good Ol' JR.  For that's right, Jim Ross has been relieved of his duties for WWE.  So we will no longer hear Jim Ross call a match on Monday Night Raw anymore.

Wait, that stopped happening in 2008.

Okay, I know what it is.  For Jim Ross won't be head of Talent Relations anymore for the WWE.

No, wait, that's not it either.

Then... what exactly did JR do while being under contract for the WWE in the past five years?  I think he did some commentary for NXT.  I believe he showed up for Raw or Smackdown to do commentary when someone wasn't there.  But has Good Ol' JR even had a full time gig since 2008?

Now this is no way a knock on Jim Ross.  I am a huge fan of Jim Ross.  The wrestling commentator.  Not JR the character, that WWE has had him play since early 1997.

Jim Ross first wore the cowboy hat at the Royal Rumble in 1997.  The Royal Rumble was in Texas that year, so JR got into the vibe and dressed like a cowboy.  And somehow that hat stuck with him for the remainder of his commentary career in the WWE.

Gone was such passion that he had while calling a match between Sting and Vader, and in its place was catch phrases like "stompin' a mud hole and walkin' it dry."

What does that even mean?

But I understand he had to adapt and change to do what the WWE wanted him to do.  For Vince McMahon looks at the WWE as not a wrestling federation - no.  For it's just entertainment.  With some crazy moves in between.

But the way the WWE handled Jim Ross at times was almost disgusting and heart wrenching.  Vince McMahon would have Ed Ferrara impersonate Jim Ross in Vince's office for kicks.  And as you all know, Ed would later go on to WCW and do that same kind of impersonation as Oklahoma as an on screen character.

Vince had Jim Ross get fired on TV in story line - let alone the two times he was fired before in real life from the WWE by Vince McMahon.  He had to kiss Vince's ass.  He had to watch as Vince made a mockery out of the colon cancer that he may have had.  He had to lose embarrassing matches and have embarrassing situations take place while the WWE was in his home town.

And why did all this take place?

In a toga outfit.

I will never understand what happened to have Vince want to embarrass Jim Ross so much while Jim Ross was a apart of the WWE.  But he did.  And he did it a lot.

So now with Jim Ross being fired today from the WWE on September 11th 2013, what's next?

A trip to TNA?  Highly unlikely.

Get rehired by the WWE in six months?  Most likely.

So no matter the reason for the firing, or whatever excuse Vince McMahon wants to come up with, you sir are probably doing Jim Ross a favour.  He can now go back to being Jim Ross - the man who was the voice of UWF.  The man who made fans believe Sting was going to beat Ric Flair at the first Clash of the Champions.  The man who even in 1994, went to Smoky Mountain Wrestling and called some of the most passionate matches along side Bob Caudle for Jim Cornette.

Or is it too late?

Is Jim Ross gone and Good Ol' JR here to exist forever?  Only time will tell. 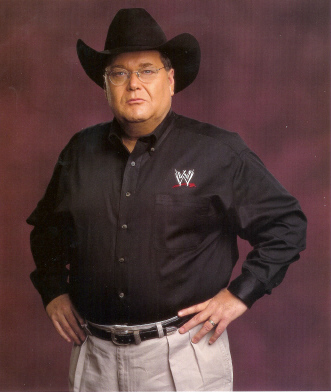 Whatever you end up doing Jim Ross, I hope you are at least happy, and doing it because YOU want to do it, and that YOU enjoy doing it.