It sucks as you get older and the wrestlers and sports entertainers you grew up watching start to pass away.  It seems to happen more often now than before, and it's just an easy reminder that we are not here for a long time, but we should try to be here for a good time.

A former NFL player, who ended up becoming a pro wrestler and learned how to be one in the most physical way possible.  That being by wrestling in Japan.  Back in the 80s and early 90s, Japan had many big, phyiscally tough men compete with each other in rather tough battles.

That name will always be joined with Vader in some way, because of the night Vader's eye popped out of his head all because of Stan Hansen.  I remember seeing that match many, many years later, and couldn't believe I was seeing Vader put his eye back into his socket while selling a headlock.  Impressive!

His WCW run was memorable on so many levels.  He came in as a wrestler from Japan, and dominated the likes of another wrestler who is no longer with us, "Z-Man" Tom Zenk.  He would go back and forth from Japan to WCW frequently, until 1992 when he set his eyes on the prize.  That being the WCW World Championship.

The Stinger!  The man who wrestled Vader more times than anyone else during Vader's WCW career.  Vader dominated Sting at the Great American Bash '92 and won the WCW World Title.  Of course, that reign didn't last as long as many suspected, and a few months later Ron Simmons took the WCW Title from Vader.  Vader would then help Rick Rude, by defending Rude's US Title against Nikita Koloff, dominating him in the process.  He would win back the WCW World Title from Ron Simmons at the end of 1992, and go on to dominate 1993 like no other had before him.

They all went down at the hands of "the Rocky Mountain Monster" Big Van Vader.

A tease for a Vader vs. Sid match in WCW happened but never went down like planned because of a situation involving Sid and Arn Anderson, but years later in the WWE would we see Vader vs. Sid take place.  But his WCW Title reign finally came to an end in December of 1993 at Starrcade, when Ric Flair took the gold from Vader!

Vader never had a year like that again in the world of pro wrestling sadly.  In 1994 he was stuck in a feud with another man who is no longer with us, Ray Traylor, who wrestled as The Guardian Angel.  He would end up taking the WCW US Title off "Hacksaw" Jim Duggan at Starrcade '94, but then ended up doing what everyone else usually did....  put over The Hulkster.

Vader ended up leaving WCW in the fall of 1995 and showed up in the WWE at the Royal Rumble '96.  Everyone was excited to see Vader appear in a WWE ring, but once we saw how he was handled at the Royal Rumble event, we all knew that his WWE career wouldn't be that great.  For we got to see a 229lbs sports entertainer in Shawn Michaels, not just eliminate Vader at the Royal Rumble, but also eliminate Yokozuna at the same time!

So where as three years prior, we had 275lbs Lex Luger struggle to body slam the 570lbs Yokozuna, and we had the likes of Cactus Jack, Sting and Hulk Hogan sell for the 450lbs Vader, we got Shawn Michaels eliminating both men.  That seems about right for the WWE.

Vader would stay with the WWE until 1998, when he would leave and go back to Japan and have a successful career there once again.  The last time we seen Vader on WWE TV was in 2012, when he came back to destroy Heath Slater.  So at least Vader's last appearance on WWE TV was how he should have been shown from the get-go.  By dominating his opponent. 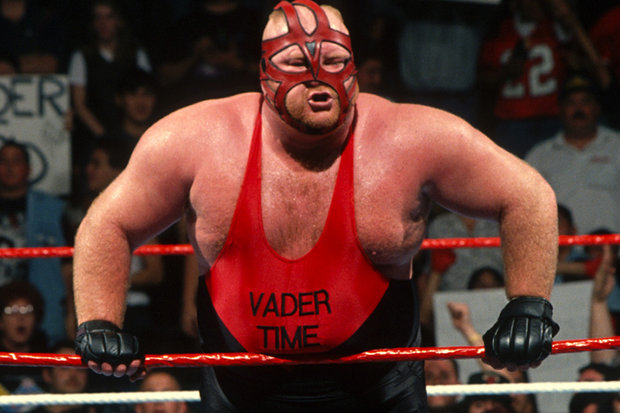 Rest In Peace, Leon!  You were much a head of your time when it came to the world of sports entertainment.  You were scary, big, agile, and tough!  Your memory will live on forever.  For it will always be Vader Time!

Reply Michael Youngblood
2:28 PM on June 20, 2018
It was a pleasure to be Vader bombed at center stage by Leon and making him look awesome! Thank you Vader!!