There was no need for some catchy title today for what I am about to write.  For this is an entry that I don't even want to write about, because it sucks that it happened.  But here it is nonetheless.....

Bobby "The Brain" Heenan has died.

Bobby's health hasn't been the greatest in the past 15 years or so.  He even stated so at his 2004 WWE Hall of Fame induciton, when he talked about being a cancer survivor.  But sadly, that was one problem that kept haunting Bobby for years.

Let's be honest.  We all loved Bobby Heenan.  Sure, in the 70s and 80s and even early 90s, he was a horrible person in the sports entertainment business, but we all loved to hate him, didn't we?

He managed so many greats in the AWA, and the WWE, and even in WCW in 1996 he came out of retirement to manage Ric Flair and Arn Anderson at Great American Bash.  He was the greatest.  No doubt about that.  He was considered to be the top heel manager in WWE in the 80s, and always was a thorn on the side of Hulk Hogan.  And not just in the WWE either!

In the early 80s, Bobby Heenan managed Nick Bockwinkel.  Another great that is sadly gone too.  But Bockwinkel was AWA World Champion, and unlike the WWE situation, Hogan could never get that World Title off of Bockwinkel.  For Bobby Heenan had outsmarted the Hulkster in the AWA.

That of course, would change in the WWE era of things.

Bobby tried with Ken Patera, "Big" John Studd, King Kong Bundy, "Mr. Wonderful" Paul Orndorff, "King" Harley Race, The Mighty Hercules and even "Ravishing" Rick Rude.  None of them could take the title off of Hogan.  But one man did, and that man was Andre The Giant.  Bobby Heenan convinced Andre to turn his back on the fans, and on Hulk Hogan and the friendship that they had, to go after the WWE Title.  And it did pay off.

Bobby managed Arn Anderson & Tully Blanchard, as well as Andre The Giant & Haku to the WWE Tag Titles, and helped bring the Intercontinental Title to Rick Rude and Mr. Perfect.  Bobby could do it all in the WWE.  And when he wasn't managing, he was commentating with the likes of Gorilla Monsoon, Vince McMahon, Randy Savage, Jim Ross and Tony Schiavone.  Whether in WWE or WCW, Bobby could talk and do what he did best - make the heels seem innocent, and bad mouth the faces.

Bobby "The Brain" Heenan managed like a wrestler, and wrestled like a manager.  He would take a beating from Hogan, Warrior, Duggan, Roberts - whoever it may be - so the man he was managing wouldn't get hurt.  But he would be quick to come up with schemes, plans, and tricks to outsmart the good guys.  For Bobby Heenan was the man.

So with that being said, we wrestling fans lost a huge member of our world today.  We lost the greatest manager to ever step foot inside a wrestling ring.  We lost the manager that all managers should learn from and study from.  We lost "The Brain" of professional wrestling and sports entertainment. 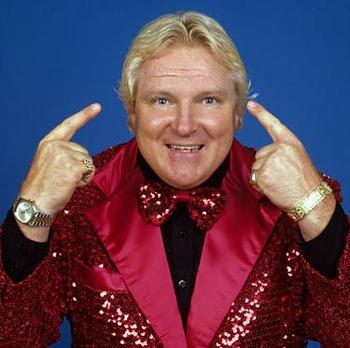 Rest In Peace, Weasel.... ooops, I mean, Brain.  For we all love and miss you greatly.