Today I woke up to hear about the horrible news that one of my childhood idols in Bret "Hitman" Hart is fighting prostate cancer.  Now I clearly don't know Bret personally, but I spent my childhood and teenage years growing up watching him compete on WWE and WCW television.  He was one of my favourite wrestlers - and he was Canadian!  That to me, was so cool.  Just because I am Canadian.

Bret Hart had such an impact on my life that I had to have his wrestling figures when I was younger.  I bought the LJN rubber wrestlers off a friend just to get Bret.  And I got the Hasbro wrestling figure of Bret for my 15th birthday.  I made sure to get the Jakks Bret Hart figures and lately the Mattel ones too.  And just a month or so ago, I bought the Jakks Bone Crunching Action Bret & Owen set.  It's MOC - meaning "mint on card" tacked on my wall.

I know that this blog isn't a long winded rant - something I do so well on here at times, but I just wanted to show my love and concern for what is going on with the "Hitman" right now.  I am hoping that Bret can beat this cancer that he has, and prove to everyone that he really is the best there is, the best there was, and the best that there ever will be. 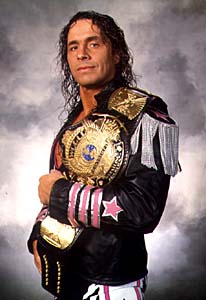