My friend was over today and was asking me about the WWE Network.  I live in Canada, so we have our WWE Network as a TV station as well as the online stuff too.  We even have a WWE On Demand for our TV cable box.  So I put it on to show him what it was like and I showed him an episode of WWE Legends' House.  And in watching it, Roddy Piper says the line, "Legends never die, they just get better."

Three hours later I go on to Facebook to see a post from TMZ saying that Roddy Piper had passed away.  He was 61 years old.

It's almost now that I have become numb to seeing my childhood heroes pass away on me now.  And in the past few months we have seen the passing of Dusty Rhodes, Buddy Landell and now "Rowdy" Roddy Piper.

I was clearly influenced by Roddy Piper in just my every day life.  For example, I have been known to cut into a Piper promo if I am really mad and I start yelling.  It's not what I am saying that sounds like Piper, it's how my voice goes.  I always took that as a compliment that I can somehow find my inner Piper when yelling at someone.

I am lucky enough to own the old WWF Coliseum Video release of "Rowdy" Roddy Piper's Greatest Hits.  An old girlfriend of mine from 10 years ago worked at a video retail store and the owner was getting rid of any old VHS tapes.  I was lucky enough to get the old wrestling tapes.  And that Piper tape was part of the group.

I watched that tape more than any other WWF Coliseum Video that I owned.  I thought it was so cool then - still do to this day though.  If anyone hasn't seen it, I suggest you do so.  Matches with Andre, Hogan, Snuka, it's all there wrapped up in one hour and 45 minutes of jam packed action.

I loved They Live.  I think everyone knows of that movie - if not the movie at least the famous line that Roddy Piper said in that movie.  And I think we've all wanted to kick ass and chew bubble gum from time to time.

I think this death is so weird because Roddy Piper was Wrestlemania.  I know we've lost Dusty lately, and many greats before - Randy Savage, Mr. Perfect, British Bulldog, Owen Hart just to name a few - but Roddy was just as big as Hulk Hogan was.  If it wasn't for Piper, there may have not been a Wrestlemania.  Hulk Hogan needed the perfect bad guy to go against, and Piper filled those shoes.

From being WWE Intercontiental Champion, to WCW United States Champion, to all the old titles he held for the NWA Mid-Atlantic days.  Piper has done it all as far as I'm concerned.

I think this picture is the best way to remember Roddy Piper, with the t-shirt saying "No Fear" on it.  Because Roddy Piper lived like he had no fear. 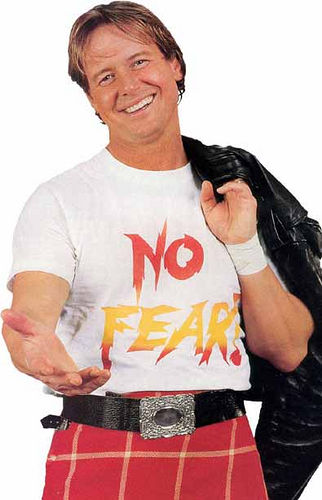 So rest in peace, good sir.  For you brought the wrestling world to its knees.  We all miss you, Hot Rod!