How does the WWE do it?  For two years in a row now (actually four if you want to get technical) the WWE has messed up the Royal Rumble match with having someone win that the fans just don't want to be the winner.

So let's talk about what happened at the Royal Rumble.  The matches were okay.  It didn't really start to get good until the triple threat match for the WWE Title with Brock Lesnar, Seth Rollins and John Cena.

That match was amazing!  Hands down, that was such a thrilling match for emotion.  Seth Rollins proved once again that he is the man, and HE IS the guy the WWE should be pushing.  What a heel.  What a great heel.  Never has a heel been this great since 10 years ago when there was a "Rated R Superstar" named Edge who was causing havoc at each event.

Brock Lesnar is a beast.  The ultimate wrestler's wrestler.  He can do it all!  Who could possibly beat him for that title?  I just don't see it being Roman Reigns.  If John Cena can't do it, then nobody can.

Now onto the Royal Rumble match itself.

What a disaster that was.  Last year had such an amazing Rumble match.  Many men in the ring for long periods of time.  This year we saw Bray Wyatt destroy five or six guys in a row, and then once Daniel Bryan came in, that stopped.  And when Bray eliminated Bryan, it felt like the entire energy in that arena got sucked out.  We got "Daniel Bryan" chants all through the night.  And if that wasn't happening, we had long sounds of constant 'boos' happening.

The problem is though, is that it appears this may be a recurring theme every year at the Royal Rumble for Daniel Bryan.  Which is okay, in that it's great Bryan is still over and has a huge fanbase.  The problem with it though, is that we already seen this last year.  Daniel Bryan already had his moment last year at Wrestlemania, and it was great.  But does it need to happen each year?

They missed a golden opportunity to have Miz get eliminated and see Mizdow follow him over the top rope.  I don't mind what they did with those two in the Rumble match, but I feel the missed the boat with having something funnier happen.

Bubby Ray Dudley returning.  Sure, DDP came back, so did The Boogeyman.  But Bubba Ray Dudley got a huge reaction from the ECW crowd and it was cool to see.  Though it seemed a bit odd that D-Von wasn't there.  I wouldn't mind seeing the Dudley Boyz one last time in a WWE ring before they both call it quits for wrestling.

Last year everyone loved Roman Reigns!  The Shield could do no wrong.  The matches with The Wyatt Family, and then with Evolution, were amazing!  But once The Shield broke up, the fans got to see what Roman Reigns was about.  And that is John Cena 2.0.  Not that he is a carbon copy of Cena, but Reigns has his few designated moves and was being pushed as the future.  That isn't even the problem.  The problem took place at the end of 2014.

The 2014 WWE Superstar of the Year: Roman Reigns.

I mean, the guy missed from September until the end of the year, and he won Superstar of the Year?  Not Seth Rollins?  Or Daniel Bryan? Or even John Cena?  So already, you could see that the WWE was getting ready to push Roman Reigns at us.

The build up for the Rumble match too on Raw and Smackdown, which showed Reigns being the man.  Then to have the final three guys that Reigns eliminate in the Rumble be Kane, Big Show and Rusev.  Wow!  Could you shove it in our face anymore, Vince?

So when having Bryan get eliminated, to see fans cheer for Ryback, and for Dolph Ziggler, and Dean Ambrose, and even Damien Mizdow, in hopes that maybe those men would win the Rumble, you do the obvious and have Roman Reigns win it; with a huge chorus of boos to go along with that win.

Oh my God, he is here!  For The Rock is here, and he is coming down at the end of the Rumble to beat up Big Show and Kane and help celebrate with Roman Reigns!!

Vince McMahon, you take out the number one guy that the fans wanted to win - in Daniel Bryan - and suck the energy from the crowd by doing that, and you have The Rock there in the arena and you don't put him in the Rumble?!?!?!

Imagine if The Rock came in at number 30, cleaned house, and won the Rumble, thus giving us The Rock vs. Brock Lesnar at Wrestlemania 31 for the WWE Title.  The rematch from SummerSlam 2002, with two huge names in sports entertainment history.  No, instead you have The Rock celebrate with Reigns, and hear the crowd boo both men!  And The Rock did not look too happy about that, for his face gave that away.

To top it off, from what I read, you have Randy Orton at the arena, and dressed for competition, and you don't put him out there?  Really?  Randy Orton?

There is just so much that I don't understand about the WWE anymore.  Is Vince McMahon trying to kill it off before he dies?  I just don't get it at all anymore.  It's like if Vince from now was in 1984, he would probably say to keep the belt on Backlund, no matter how much the fans are cheering for Hogan.

I read that Vince McMahon seemed legit surprised by the reaction of the crowd for Roman Reigns too.  And because of that, a trend on twitter started with the hashtag #CancelWWENetwork and supposedly, many people did indeed do that.  But I am willing to bet that by Wrestlemania time, all those people will be subscribed once again to it.

So this is what the Royal Rumble gave us. 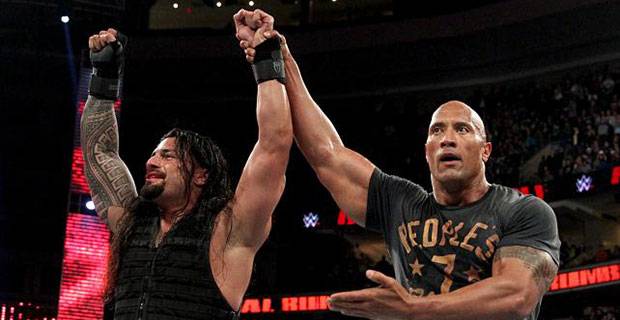 It should have been a great moment in WWE history.  A passing of the torch, if you will.  Instead, the Philadelphia crowd pissed on that moment big time.  Rightfully so?  Perhaps.  It's hard to argue that.  But now, all we can hope is that the build up to Wrestlemania 31 will be a successful one.