Wow!!  Just wow!!  I have never been more happy for someone in wrestling than I am right now.  That being that "Showtime" Eric Young is now the new TNA World Heavyweight Champion.  Now you are all probably wondering why that would make me so happy, right?

Well I need to back track a bit.  For Eric Young and I grew up together in a small village in Ontario.  And one day - along with a friend named Mike - we created this little thing we liked to call the FWF.

There we are.  Eric Young to the left, and myself to the right.  Eric, or "Jeremy" as he was known then, had this trampoline that we just had to transfer into a wrestling ring, and try out backyard wrestling.  Now you have to understand, we didn't do that stupid extreme backyard wrestling you see, with all that hardcore garbage.  We just tried to be like your favourite wrestlers, and put on the same matches we seen on TV every Monday night.

But Jeremy got the itch, and he went to a wrestling school, soon becoming "Showtime" Eric Young.

I was so happy that Jer did that, and started to achieve a cool dream.  I had that dream too, but after I took one back bump in a real ring, I said to myself "yeah, that dream is over."  For that ring was so hard!  And I give - as the kids say - 'mad props' to Jer for sticking with it, and going through all that pain to make it.  He did just indeed make it.  That being to TNA.

So seeing Jer wrestle on PPV for TNA, and win the Tag Titles a few times, and seeing him wrestle on Spike TV, and all the other title belts that he has won was so cool.  But nothing, and I mean nothing, would compare to what I got to see tonight.

I happened to go on Facebook and see Ryan Clark - who is a great wrestling reporter and is my number one source for news with www.thewrestlinganswer.com website - post on his Facebook status that Eric Young was in the World Title match on Impact.  So I had to stop doing what I was doing and watch Impact!

I turned it on, and there he was, in the ring with Magnus.  I couldn't believe it!  I mean, yeah, I seen him wrestle last week with Magnus, but Samoa Joe and Abyss were involved.  For this was one on one!  Would he actually do it?  I waited to see...

"Oh my God!" I said, as I couldn't believe it, for "Showtime" Eric Young had won the TNA World Heavyweight Title!  I was so happy.  I just was filled with joy.  For Jer did it.  He became a World Champion in wrestling.  I quickly had to write on his Facebook wall, congratulating him, and showing him how proud I was of him.  For he did it!

From his amazing matches as a part of Team Canada with the likes of Bobby Roode, Petey Williams and Johnny Devine, to "Don't Fire Eric", to being tar and feathered, to the World Elite, to being a member of The Band, to being the TV Champion, to being paired with a Knockout in that division, he's done it all.  He wore a chicken outfit, he played scared of pyro, he took abuse from Scott D'Amore, he found his courage thanks to Jeff Jarrett, and he even attacked Scott Baio before.  But through all the horrible times, and through all the good times, he did it all with a smile and did it the best he could.

Now tonight, he can gladly say he's a World Heavyweight Champion, and all that stuff made it possible to have that happen tonight.

Congratulations Jer aka Eric Young, you deserve it, brother!! 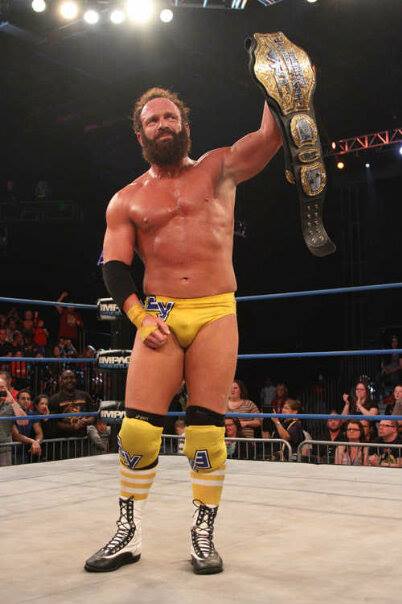 Enjoy this with your fans, friends and family.

-Jammer aka your buddy, Bill