Bob Caudle: Never Gets The Respect He Deserves

I find it hard to believe that I actually have so much I want to talk about in these blogs lately.  So much as a matter of fact that I am trying to narrow down my choice for today.  A lot of things lately have rubbed me the wrong way - and not about the current industry!  No, for stuff regarding wrestlers or commentators from the past.  But I will stick with the first one topic I had at hand for this blog.

Okay, a lot of you are probably wondering who he is, and you may have a right to wonder depending on your age.  Bob Caudle was the commentator for Starrcade 83, and other NWA wrestling events in the 80s.  In the 90s he did commentary for WCW shows, and when he left the WCW, he found his way into such organizations like SAPW, and SMW.  He had a magical way of calling a match, and it seems to go forgotten now.

Because everyone loves Gordon Solie.

He'll put you to sleep!

His voice had no depth to it at all.  He would call a match like you would call your breakfast routine.

"Okay, so I am putting the bread in to the toaster, uh uhn, now we'll just wait to see how long it takes to pop.  While that's happening I will cook up some eggs, and have a great breakfast meal today."

That's pretty much Gordon's way of talking.  His commentary would go something like this.

"Both men are to their feet.  Flair punches Race, but Race ducks.  Ohhh and a belly to back suplex (pronounced soo-play) and a near pinfall to end this match, uh uhn."

Yet everyone will still say that Gordon Solie was the best, when Bob Caudle was right there beside him during these matches.  People now say Jim Ross was the best commentator of all time, and you know, I would put Jim Ross before Gordon Solie, that's for sure.  But where do you think Jim Ross learned his commentary from?

Look at that, Jim Ross and Bob Caudle calling a match together, and it actually sounds interesting.

Now let's hear Gordon Solie in action along with Bob Caudle.  And you can see why Caudle was better than Solie.

So I may be the minority in this, but I would definitely pick Bob Caudle over Gordon Solie, yet it seems nobody ever wants to mention Caudle's work.  It's always Solie, Solie, Solie.

Jim Ross at least did state before that he feels that Bob Caudle does not get the respect and justification that he so rightfully deserves for his work at calling some great matches over the years.

So wrestling fans, feel free to go back in time and watch some old Mid-Atlantic Championship Wrestling shows, or old NWA super shows.  For Bob Caudle is definitely a voice that you'll enjoy. 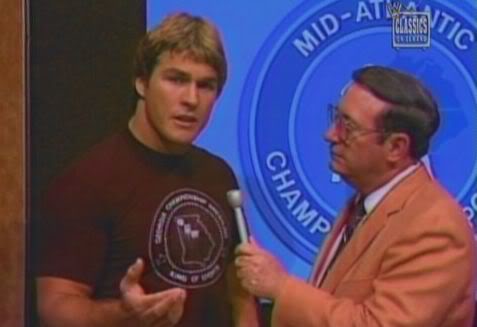 So when looking back in the wrestling history books, I am not saying don't respect the likes of Gordon Solie, Jim Ross, Lance Russell, Gorilla Monsoon and others, but please take a bit to show some respect to one of the greatest commentators of that era, Mr. Bob Caudle.

Reply Paul Jones
11:35 AM on February 14, 2016
Bottom line, I like Bob Caudle better, because I grew up watching MACW. His voice brings back my best memories of watching pro wrestling as a kid. Caudle is #1 in my book! On the other hand, when we got cable I was able to watch GCW w/ Gordon Solie. I liked Solie, because he called matches like they were a legitimate sport!!! Everything was very serious. Of course it is the many catch phrases we all love. Caudle-'High in the air with a suplex!' Solie-'Now wait just 1 minute!!!'